When  we study about computing , there are so many terms which we take it for granted . I think  PS/2 is one of them . Every body is aware that the small six pin din connector where you plug the keyboard and mouse is called ps/2 connector. But why it is called by such a strange name ?

Well , the term PS/2 was the name of the ill fated micro computing project  from IBM. it is expanded as personal system -2 .

When IBM introduced the initial range of IBM-PCs back in 1981 , they never thought the PC will become a trend setter and does not care about  making it a propitiatory one . But when the PC become a success , the major beneficiary  were the clone makers like HP , Compaq ,AST and so on because of the non propitiatory nature of PC .

So IBM decided to create an advanced architecture machine which will pose a serious threat to the PC-Clone makers by its technology as well as looks . So in 1987 they produced the PS/2 range of micro computers .

The Personal System -2 standard was unique  one with advanced features like MCA slot , Micro floppy diskette , XGA graphics support  and the small form factor connector for the keyboard and mouse . But the proprietary nature of the machine made the computing industry against it and the product failed miserably to gain public attraction due to the high cost associated with it  .

The only thing that survived from the ill fated machine was the connectors for keyboard and  mouse and they were called after the original product . Thus the name ps/2 keyboard and ps/2 mouse 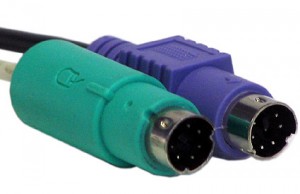