Virtualization is the new buzz word in computing industry. Even though a normal customer of support engineer is exposed to this term recently, for the past few years it is one of the favorite word for the IT division of a corporate company.

Even if you are not much familiar with the typical concepts of data center virtualization, I am sure you have come across the ideas of virtualization through the use of soft wares like Virtual box, VMware workstation and Microsoft Virtual Machine.  Yes the same software you are using to run multiple OS on your system is also the basic concept behind the corporate level server virtualization.

Let us try to discuss some basic aspects of data center virtualization   and how it is different from your typical toys used  for  running virtual machines.

For any large organization which uses large number of computers , there are so many issues associated with these systems. In my personal experience most of the company management treat the IT division as an evil that eating  out the big chunk of revenues of the company .  The computer as well as the software installed on it demands constant upgradation process and the life span of a typical technology is relatively  small forcing the companies  to purchase new systems and peripherals  almost yearly.   In addition to that the power consumption of the system as well as the problems created with  e-waste and the environment issues associated with this systems are also a big issue.

But all these options for power reduction and energy saving will not be feasible for the datacenters of your company. Datacenter is the place where you keep all your servers in a secure and temperature controlled room. ( now a days it is more fashionable to say data center than calling  it a server room )

These servers on the datacenter manages the  data flow and companies expect the these servers  must have an availability level of almost 99.999 % . An average server  with raid controllers and multiple hard disk s  consumes more than 1 KW of electricity and typical data centers has hundreds of servers operating 24 hours a day 7 days a week .  We cannot implement any kind of power management aspects on these servers as the customers need to get the full performance of these server all the time . 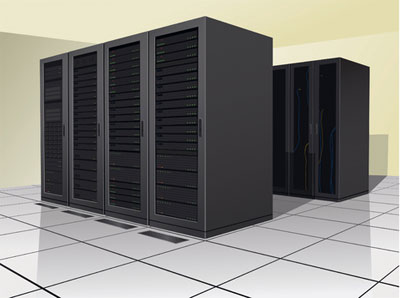 The secondary issue is that all these machines converts portion of  the power it consumes to thermal energy and naturally heats up the data center . So we have to use high power air conditioners to maintain the temperature of the data center.

So it means that the server  consumes power and then  additional power is consumed to cope up with the temperature management . So even though we are not really thinking about it , the corporate data centers  are one of the main culprits for global warming  🙂

Next issue is that the cable management, server installation , disaster management system , all these things adds up to the total implementation and running cost of the data center.   So we cannot  blame your finance manager if he things IT division is the biggest  financial   burdens of the company .

The next big issue is that all these servers for which the company spend so much money and effort will not utilize even the 10 percent of its efficiency. i.e. it is just like the case of a highly paid staff in your company  who sits idle for  7 hours our of his 8 hour  work time . Any management will not tolerate such an employee but the same company maintains these lazy  servers  in the comfort of the air conditioned room .

Data center virtualization is the answer to almost all the issues mentioned above .

We can also call it server virtualization .  i.e. we are dividing a physical server to many virtual servers and run server operating system on each of these virtual servers .

The basic idea behind such virtual server is not really new. IBM mainframes implemented the basic version of this idea in early 60’s .  Microsoft used this concepts in their 1992 release of windows NT server to run virtual DOS machines and they are currently using the virtualization idea to give compatibility mode for XP  applications in windows 7 . But when this idea is developed further to meet the needs of a datacenter management rather than individual desktops , we call it as Data center virtualization .

Energy saving is not the only area where data center virtualization shows its magic. By downsizing the 100 or more physical servers in to 6 ot 7 physical machines , it saves the effort and cost of cabling and the investment of switching and routing equipment . Now a days even the hardware concepts like switching and routing are virtualized making the life of an IT admin more easier .

Now let us check  how the concept of data center virtualization is implemented .  In a typical physical machine the operating system isn installed on top of your microprocessor and on top of the operatring system , the application software is installed . .

This basic model is changed in virtualization model. Rather than the concept of  an operating system on top of a hardware , a layer comes in between your real hardware and operating system.

That means on top of the  hardware  a virtualization layer is installed . We can call this layer as hyper-visor . On top of this hyper visor layer you can create as many virtual computers as you need.  Each of these virtual machines has their own virtual processor , virtual memory , virtual hard disk and virtual networking .   The operating systems running on top of these virtual machines does not has a clue that they are running on a virtual environment . That means  you are virtualizing the hardware and not the  software . 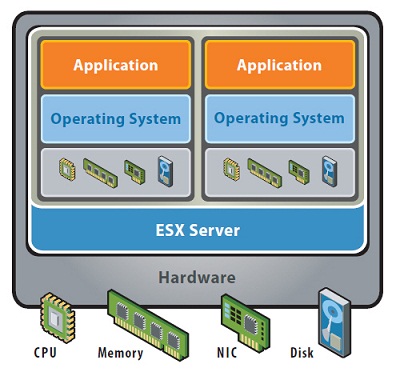 Each of these virtual machines along with the operating systems and application software are a mere collection of files in real world. So  that means for creating your next virtual machine using these files you need only few minutes .

If your companies Finance division needs a server for their new project  , for the conventional physical machine approach will  few days to order new machine , install the operating system , cable it and do the testing before it is handed over to their use . Now all you need is few mouse clicks  to make the new server up an running and that too in just few minutes .   If you have a remote access to your data center on your smart phone , you can do this process  virtually from any part of the world.

VMware is the world leader as far as the bare metal virtualization industry is concerned .  The  basic products like ESXI free edition can be implemented with out any license  cost and can be used to explore the feasibility of virtualization in your company.

Naturally the enterprise class products comes with a price tag ( little bit high ) but really make sense if your  environment  that is mission critical .

The skilled man power for the Virtualization segment is low comparing with the demand of this fast expanding   market . In addition to the normal infrastructure admin , this concepts creates a new post named virtualization admin which is a blend of the basic IT infra skills , storage skills and virtualization skills.

This article is an attempt to cover the very basic concepts of datacenter vitalization .  More topics can be discussed based on the requirement from the  persons like you . Please use the comment box to have a more detailed  discussion on the same.